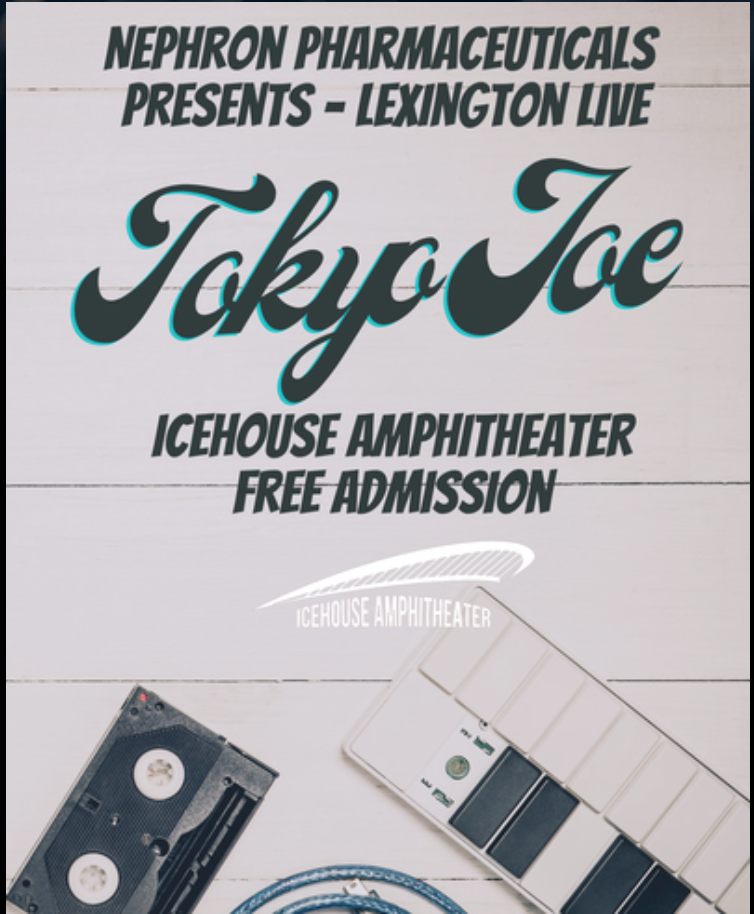 Join Icehouse Amphitheater for their Lexington Live Concert Series: Tokyo Joe. Presented by Nephron Pharmaceuticals. Since their 1996 debut, Tokyo Joe has become one of the fastest rising bands in the Southeast. Night after night, in clubs from Virginia to Florida, the Columbia, South Carolina based rock group has shared their infectious sound with more than a quarter of a million fans. Performing more than 200 dates a year, they have secured a lasting place within the ranks of the South’s most popular musical acts.
In today’s world of manufactured music, Tokyo Joe stands out from the crowd. Though most of the music is of the rock genre, lead vocalist and founder Greg Bickley credits musicians like Billy Joel and Elton John as early influences. Indeed, that inspiration is evident in Bickley’s sultry vocals each time he picks up a microphone. Also the band’s songwriter, guitarist, and pianist, Bickley was voted “Best Male Vocalist,” adding to an ever-growing list of band awards that include “Best Rock/Pop Band,” “Best CD Release” and “Best Band” in Savannah, G.A., Columbia, S.C., Hilton Head, S.C., and Beaufort, S.C.
Tokyo Joe delivers great music through some of the most highly skilled, energetic musicians in the business. Dale Burgess’s screaming guitar, Kell Donald’s methodical bass and Johnathan Phipps’ resounding percussion showcase original masterpieces of lyric and melody. The catchy hook of “Believer” and bittersweet rapture of “It Hurts” are examples of what makes their music so intoxicating. With singles released to over 1000 radio stations on the Network Top 40 Compilation from “Likely Story” (1998) ,”All in All” (1999), “Live, Loud, and Clear”(2001) , “In This Lifetime” (2005), “Everything That’s Good” (2007), and their newest release “Keep the Fame” (2014) Tokyo Joe has proven to be what fans want to hear and buy. Album sales have exceeded other regional acts throughout the Carolinas and Georgia.
The band constantly has its finger on the pulse of the region and outside music industry. In addition their own thriving fan base, Tokyo Joe has perforemed alongside bands like REO Speedwagon, Better than Ezra, Blessed Union of Souls, Bachman Turner Overdrive, Sister Hazel, Georgia Satellites and Marshall Tucker. The band has played world-class venues throughout the Southeast including Raymond James Stadium, Carolina Coliseum, and House of Blues.
The concert starts at 6:30pm  & admission is free.